Tumor angiogenesis research has evolved to become one of the most rapidly growing biomedical disciplines. It is also a conceptually novel avenue in cancer research, as it looks beyond classical tumor cell-centric oncological research strategies to focus on the stable tumor stroma instead of the neoplastically transformed tumor cell compartment itself. Tumor angiogenesis research has also defined a new paradigm in oncology research which currently drives developments towards a more complex molecular understanding of later stages of tumor progression as they are associated with metastatic dissemination.
The field of angiogenesis moved beyond the simplistic concepts of an invading and migrating capillary sprout to increasingly appreciate vascular morphogenesis as a complex three dimensional process that involves distinct steps of organization and anastomotic network formation, asymmetric flow-driven orientation into arteries, capillaries and veins, mechanisms of maturation by recruitment of covering mural cells, and eventually molecularly poorly understood mechanisms of organotypic differentiation Moreover, angiogenesis modulates and is modulated by the environment. Thus, the hitherto simplistic concept of angiogenesis as an individual mechanism has to be extended in order to study the role of angiogenesis associated with certain pathological conditions as tumor growth.
Our laboratory research program is aimed at understanding the involvement of the different key players of the angiogenic and lymphangiogenic with tumor growth, invasion and metastatic tumor progression. Primarily focussing on vascular receptor tyrosine kinases (VEGF/VEGFR/NP, ephrin/Eph, Semaphorin/NP/Plexin, Angiopoietin/Tie), each of the lab’s three teams has defined its research program and a primary technological platform expertise facilitating a strong tutorial atmosphere and the distribution of the resources within the team. 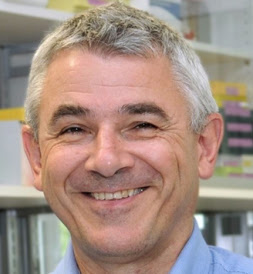 Hellmut G. Augustin is Professor of Vascular Biology at the Medical Faculty Mannheim of Heidelberg University, Head of the Division for Vascular Oncology and Metastasis Research at the German Cancer Research Center (DKFZ), and Founding Director of the European Center of Angioscience at Heidelberg University, Germany. Trained as a Veterinary Pathologist (Hannover, Germany) and as PhD in Experimental Pathology (Cornell University, USA), he worked previously as Assistant Professor at the University of Göttingen, Germany and as Department Head at the Tumor Biology Center in Freiburg, Germany.

The Augustin laboratory (www.augustinlab.de) studies 1.) the molecular mechanisms of physiological blood vessel formation, assembly, and maturation focusing on angiogenesis regulating receptor tyrosine kinases, most notably on the Angiopoietin-Tie ligand-receptor system as well as on other selected novel candidate molecules, 2.) the mechanisms of organotypic vascular differentiation and angiocrine signaling studying the lung and liver vasculature as prototypic vascular beds, 3.) the molecular mechanisms of tumor progression focusing on tumor-vessel interactions during metastasis, and 4.) translational work aimed at defining the therapeutic window of stromal targeted therapies.